How And Why To Sync Data Between Different Evernote Accounts Evernote is one of the most popular cloud services available to professionals for individual use, as well as company use, in companies both large and small. It is especially useful in BYOD environments which deal with remote workers. From the Evernote app, users can quickly jot down notes, take photos, create audio clips when typing is not efficient (such as driving), and much more. Users can also save web pages to Evernote for research or other use, and the tagging and searching features are unbeatable. Evernote also allows users to sync to certain other cloud services such as Dropbox. But one question we have heard a lot recently is- how can I create an Evernote to Evernote sync?

Why create Evernote to Evernote sync?

How to create Evernote to Evernote sync

The process to create an Evernote to Evernote sync is simple. First, you set up an account with cloudHQ. Then you need to go to the sync wizard, which can be accessed here. Drag the Evernote icon to the box on the left. 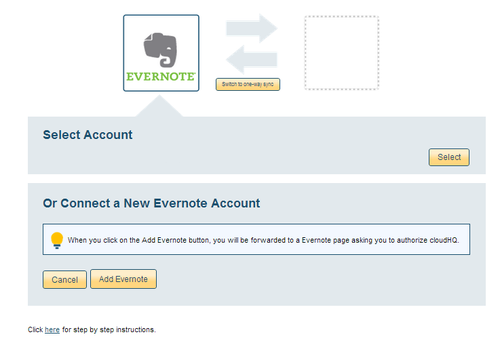 Now select the notes or stacks that you wish to sync. Now it’s time to select (or create) your backup Evernote account. Drag the Evernote icon to the box on the right. You will now go through the same process of authenticating your secondary Evernote account, be it a business, personal or someone else’s account. Select the notebook or stack where the files will be synced to, and you will be taken to a settings page. If you only want the replication to be one-way, be sure to select this. If you do not select this, replication of files (deletions, revisions, etc.) will be replicated between both accounts.

Now you are finished and have successfully created Evernote to Evernote sync. Now you will be able to automatically have files synced from a personal to business account (or vice-versa), or whatever other reason you need to sync files from one Evernote account to another. And don’t forget, cloudHQ also provides sync between Evernote and Google Drive, Dropbox, SkyDrive and many other popular cloud services.