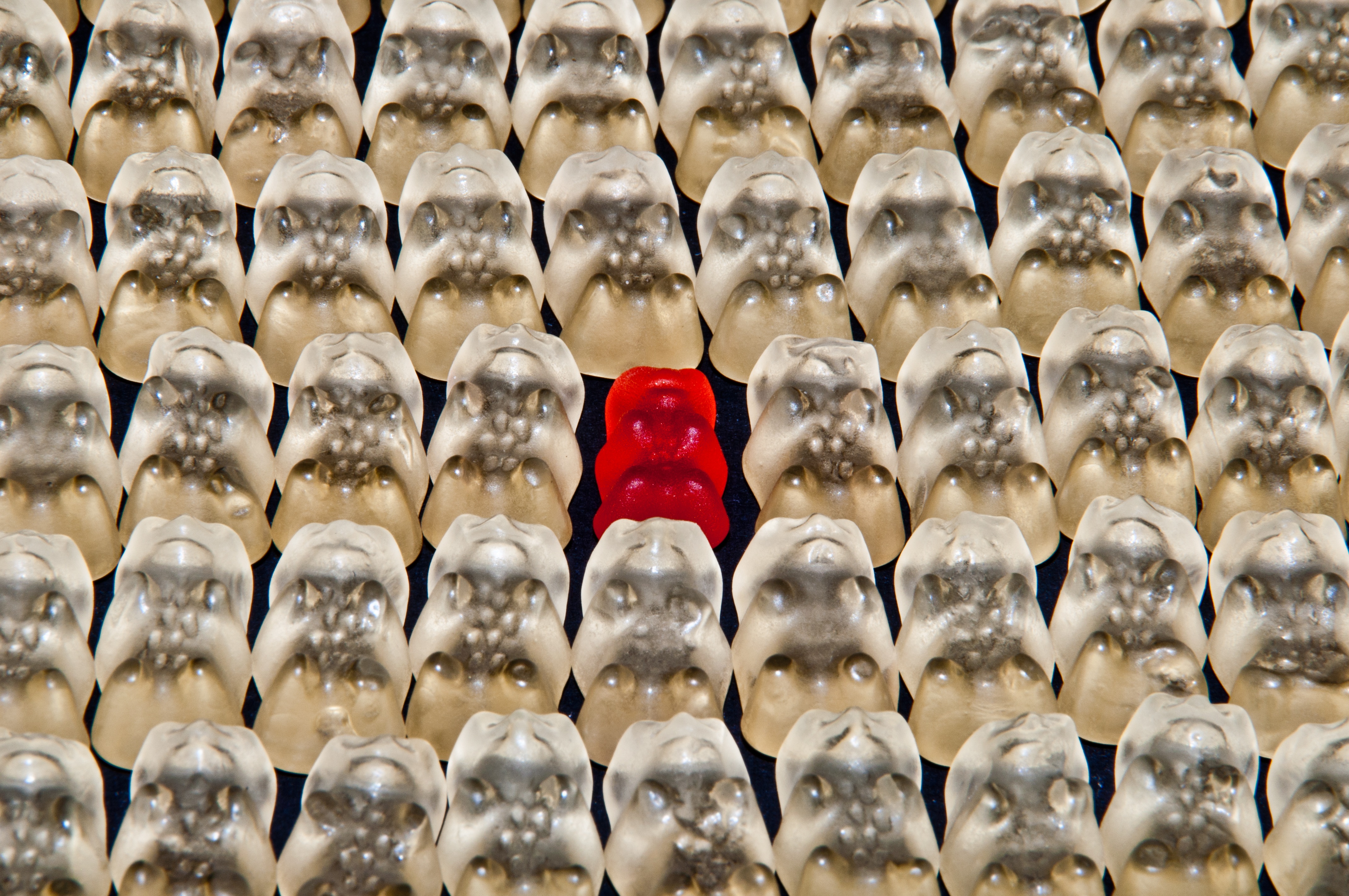 Difference Between Google Drive and Dropbox: The Real Story 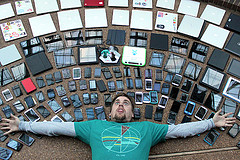 There are many online comparisons between Google Drive and Dropbox. The problem is that many of those articles are biased, and are light on substance. Most articles discuss either the costs of storage or the free storage space being offered, and then often attempt to recommend one service over the other based on these two characteristics.

Cloud Storage Solutions Based on Amount and Price Alone are Irrelevant

Cloud storage platforms such as Google Drive and Dropbox are so much more than just cloud storage. Prices are already very competitive, so price shouldn’t be a factor when deciding upon a solution that will store all  of your company assets. Does it really matter if one solution is a few dollars per month more than the other, especially if one of the solutions doesn’t completely meet your company’s storage needs?

If storage for your company data is less important than $5 per employee per month, then stop reading this blog post right now. If you want to know the real differences between Google Drive and Dropbox, take the blue pill:

There is No Actual “Winner”

It’s important to understand that there is no clear winner between the two services. Each cloud service has different features that target different audiences. In this article, we will compare the following features of both cloud services:

End user support is very important for companies. Some primary signs of great support are:

Unless you can afford to <\pay an additional $400/month for a dedicated end user support, Google struggles in this area. Google Apps customers cannot directly send emails to Google support team, but must work through their own Google Apps administrator in order to contact support. In most cases, Google support sends a reply email directing the user to Google forums. The main takeaway from working with Google is that they created an enviable ecosystem, where everything is automated and scalable. If your problem is not already answered by any of their support forums, you may very well be out of luck. Dropbox has far easier methods to contact their support desk, and Dropbox for Business administrators receive an additional support layer of priority email support and live support. PRO TIP: We advise you to try both services. Purchase both a Google Apps and a Dropbox for Business account, and open a support ticket. Use the three questions listed above to determine their support process, response time, and support staff knowledge.

Google Drive
Google Drive’s sharing features are elaborate. If you need to share files in read-only mode, in read-write mode, or if you want to print directly from the document that’s being viewed, Google makes it easy. And as for collaboration, you’re allowed to have up to 50 users simultaneously collaborating on the same file. Clearly, this kind of collaboration feature is impressively powerful.
However, there are three downfalls to consider:

Dropbox
Dropbox has a much more simplistic sharing method, but its sharing features are more lackluster than its Google Drive competitor. You can share folders in read-write mode, but files cannot be shared in read-only mode.

Revision control describes the process used to handle previous versions of files. Usually, each time a document is revised, a new version is created. If you revise a document many times, you can end up with many versions of the same file. This is one area where Google Apps and Dropbox have notable differences in the way they operate.

PRO TIP: Revision control and file recovery are critical features for many businesses; if this is the case with your business needs, then Dropbox is your best choice.

4. Easy to use (for non-technical users)

Google Apps is fairly simple to use, but there are some issues which cause confusion. Google Apps has many additional features that Dropbox does not have, such as an entire office-editing suite, email, and much more. But Google also has different app interfaces, notably, one for Google Docs and one for Google Drive. 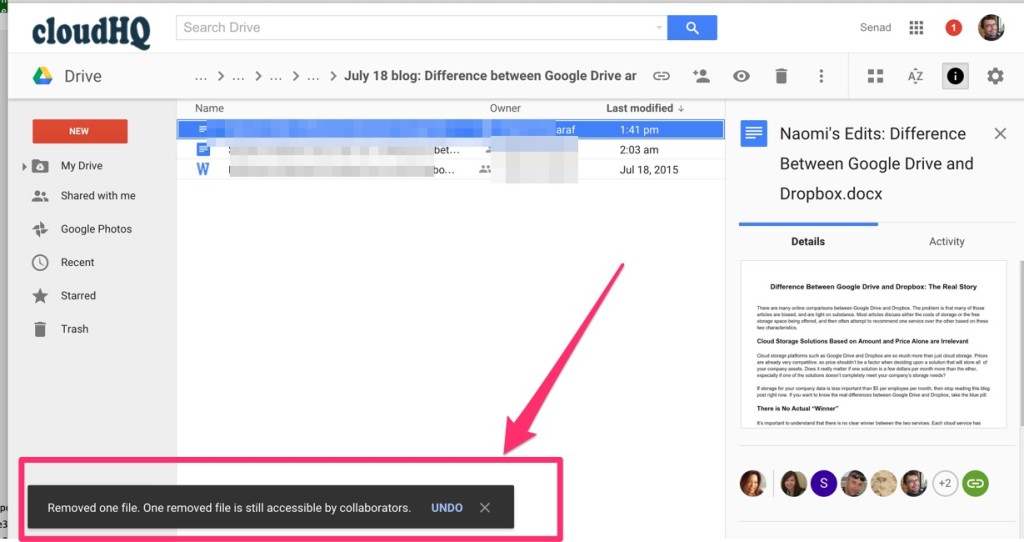 Dropbox has the simplest interface, but has far less features. For quick and simple sharing, Dropbox is the obvious answer, but for more powerful online office features, Google Apps has you covered.

Syncing cloud files to computer hard drives and devices is critical to maintaining an up-to-date company file structure between team members. Both Google Drive and Dropbox provide desktop clients that allow companies to sync files between multiple computers and devices, and the cloud.

PRO TIP: For syncing large files, Dropbox is the best choice because there are no file size limits. If you are syncing light office documents such as PDF files, text documents, Word files, and spreadsheets, Google Apps may be your better choice.

Google is continuously updating its services and its interfaces, and there is no guarantee that the product you’re using won’t be shelved for a newer, better solution. One of the main problems Google has is that it’s an advertising company first and foremost, which means that all of their services will be designed with that in mind.

Dropbox is an independent company, and a relatively small one at that compared to such a giant one like Google. However, Dropbox holds its own by having acquired 8 million business customers business customers who love the simplicity of its sync and share file features.

PRO TIP: Don’t put all your eggs in one basket. It’s better to use both services, rather than just use one that doesn’t fully meet your company’s needs.

Google Apps and Dropbox for Business both have features that are essential to any business. Integrating these two services would make your company so much more productive than choosing one that doesn’t work for you.

You can use Dropbox and Google Apps together to get the best of both worlds: the simple, but powerful, file sharing features of Dropbox, and the incredible office apps of Google.

Here’s how cloudHQ can help

cloudHQ specializes in Dropbox for Business and Google Apps solutions, such as cloud-to-cloud integration and real-time data consolidation, which improves team collaboration and company productivity. cloudHQ ensures that all authorized team members have the most current version of the file they are collaborating on, even if some team members are using Dropbox, while others use Google Apps. But cloudHQ does so much more than just sync files, we actually provide complete integration between many cloud services.

Notably, Gmail is one of the top email services for companies, and cloudHQ provides a sync service between Gmail and Dropbox, allowing you to save all of your emails (including attachments) to Dropbox, so that everyone that needs access to your files will be able to access them whether they use Gmail or not.

cloudHQ will automatically converts documents to the native file format of whichever program is being used. For instance, if you drop a Word document into Dropbox and you’ve set up a Google Drive and Dropbox integration, cloudHQ will make sure that the synchronized file in Google Drive will be accessible as a Gdoc so that it can be easily edited directly from Google Docs. The file in Dropbox will remain in Word format, but all revisions and comments that are added to the file from Google Drive will available in Dropbox. This allows everyone to have the latest copy of the file whether they are using Google Drive or Dropbox, and will help increase your team’s communication and productivity.

cloudHQ runs in the background, so that team members don’t have to be bothered by annoying popups or any other distractions. Since everything happens in the cloud, there are no files to download, and no software installation required.

4 Simple Steps To Set Up Your Sync

Your IT administrator will need to create an integration between Google Apps and Dropbox for Business via cloudHQ. Want to convince your IT admin?

This can be accomplished in just 4 steps: